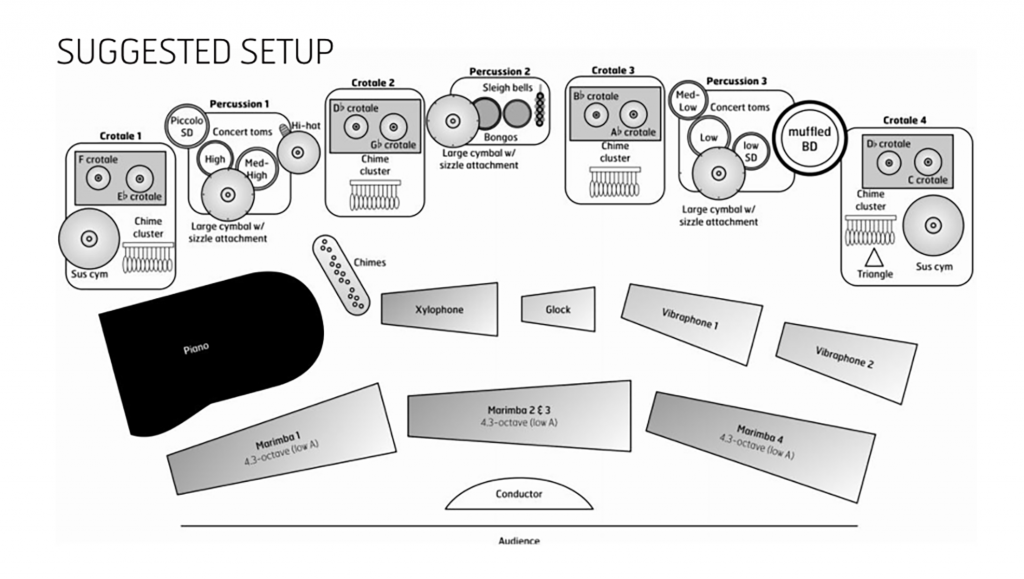 Notes from the score: Beacons of Light is a work for large percussion ensemble and piano that portrays the frailty, hope, reverence, and finally deliverance involved in processing the loss of one that means so much to so many.

Beacons of Light was commissioned in memory of Ryan McCutcheon by the Hampton High School Percussion Section.

I never officially met Ryan, but I found out very quickly that he loved music.  He loved a very diverse collection of music, which made me immediately love him, as this is something that he and I would have had in common.  Ryan also enjoyed the marching arts (ironically, another passion of mine) and played quads/tenors throughout his far too short pageantry career.  I distinctly remember seeing one of his homemade, but very well produced drumming videos on YouTube and was immediately struck by not only how musical his playing was, but by what a warm tone he got from the drums.  There is a “deconstructed” set of tenors found in the three percussion parts here (consisting of two concert toms for percussion 1, a set of bongos for percussion 2, and two more concert toms for percussion 3) that represent this love in his life.  His second favorite instrument was drum set, which was followed by snare drum, and keyboard percussion.  “Parts” of  a standard drum set are sprinkled amongst the three percussion parts, distant, but driving snare drum parts are underneath the final section, and finally a good amount of diverse keyboard percussion approaches are used to round out and pay homage to Ryan’s secondary and tertiary instrument preferences.  When I learned of some of his favorite artists and songs, these later instrument choices (especially the drum set) made great sense to me.  Ironically, two of his favorites: one by a current rap artist and the other by a famed 70s rock group, both culminate in a somewhat gospel & celebratory shuffle feel, which I drew inspiration from for the final coda of the work.  His other favorite song, which was played at his funeral, has an absolutely stunning melody and a I took my favorite 4-note sequence from it to make several subtle (and in some cases not so subtle) references throughout the duration of the work.

I came to the above knowledge about Ryan’s musical preferences through interviews with those most close to him, but I honestly drew my primary inspiration for the content in the piece from what I gleaned about Ryan as a human being.  He was liked by all, brought out the best in people he was around, and seemed to always be a positive spirit no matter what the situation.  The process of  marrying all of this wonderful knowledge about him with what my heart was telling me to write was at times incredibly daunting, and in many cases emotionally exhausting, but as I came to the final moments of the piece I ultimately realized how inspiring and transformative writing this work was.

The idea that Ryan was a Beacon of Light for someone that he never really even met is incredibly, incredibly, powerful to me.

BACK TO THE STORE